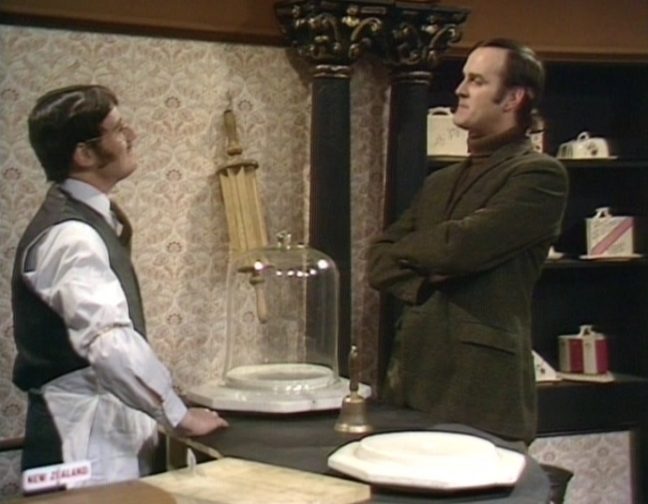 This fonduegate discussion about a cheesemonger who refused to sell a certain aged cheese to a customer who intended to use it in fondue reminded me of a restaurant we once visited where the chef was very particular about how his customers behaved, and how they enjoyed his preparations.

We’d been warned when we booked the place that if we were too loud, to the point of spoiling the enjoyment of the dinner for other customers, we wouldn’t be invited back. Fair enough, we thought. Also, the friend who recommended the place had mentioned that the master was a bit particular in his ways.

The next warning — and it was a clear one — came when the master served our drinks. We started with a beer, as usual, and when the master set mine in front of me I moved it to the left side of my plate. When he returned with our salad, he moved my glass back to where he’d originally put it. The next time he returned to serve us and noted that I’d again moved the glass to the left, he said, “Well, I suppose if that’s where you prefer it … ”

This was followed by a five-minute lecture on the proper way to eat yakitori. I mean, it’s not rocket science, but the master did have a point about not resting the next morsel on the grease on your plate from the previous morsel. After all that, I wasn’t too surprised when he refused my request for a whiskey straight up (or at least on the rocks) despite the fact he had the whiskey on hand. (He served it as a highball.) I just could have done without the two-minute sermonette about how straight whiskey would overpower the flavor of the dishes.

In the final analysis, the food was good and the price was reasonable. Nana has a friend who is interested in going, although they haven’t made a date of it yet. I’m with my son, who reacted to this story by saying he was getting angry just listening to my description.

This site uses Akismet to reduce spam. Learn how your comment data is processed.