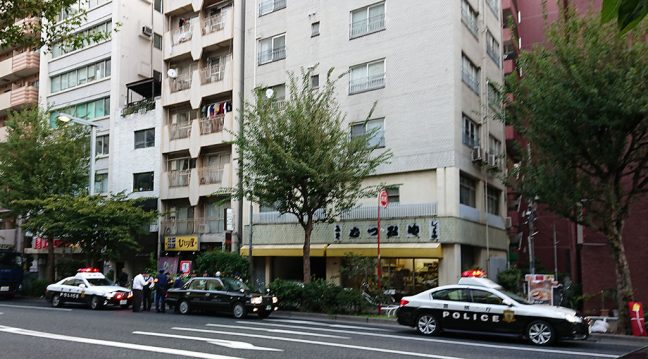 OK, this happened while I was on my way to work, so not exactly pre-dawn. More like 7:20 a.m. But anyway, the sirens were screaming. I’d assumed a fire, as we live near a major firehouse. But as I approached the corner of Shinjuku’s Central Park, I saw a police cruiser heading towards me with sirens screaming and lights flashing. As I watched, the car executed a U-turn and joined another cruiser which had pulled up behind a taxi cab along the curb.

By the time I walked up abreast of the scene, the officers from the second car had joined in the “situation” — which was revealed to be: a stoic taxi driver facing down an irate fare. As I watched, no fewer than six police officers were attempting to calm down the fare and make sure that he stayed separated from the driver. (I didn’t make any attempt to understand what the fellow was shouting, but he was obviously upset about something.)

A moment after I snapped the photo I heard another screaming siren, and a third police car joined the mix. I didn’t stick around, though, to see if they finished by rolling up the drunk in a blanket like a burrito and carrying him off.

Three police cars, and probably at least eight officers, to take care of a taxi fare complaint (and no threat of anyone pulling a gun and putting an end to the situation)? Some combination of living near a major police headquarters and having a populace peaceful enough that the typical cop’s day consists of giving directions to visitors.