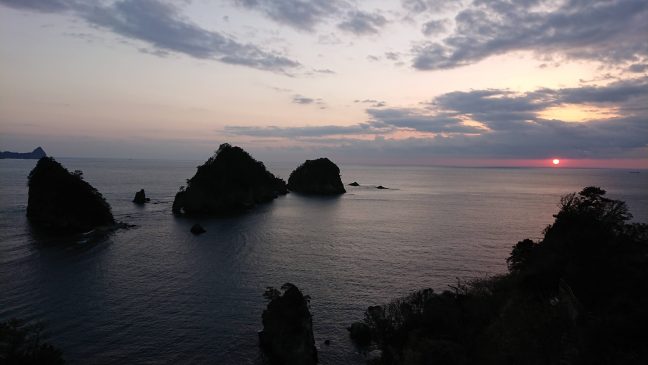 Beautiful rocky coastal area on the southwest edge of Izu peninsula
Location:
Nishiizu, Shizuoka
Website:
www.nishiizu-kankou.com
Access:
About three hours by car from Tokyo on the Shin Tomei expressway. Exit at Nagaizumi Numazu and continue on Rt. 136. By train, take the Tokaido-Sanyo Shinkansen to Atami and change to the JR Izukyu-Shimoda line to Rendaiji station. At Rendaiji, take the bus to Dougashima.
Last Visited:
February 2019

Dougashima’s rocky coastline was formed over the millennia by a combination of volcanic action and wind and water erosion, resulting in a scenic juxtaposition of stratified cliffs and islands with forbiddingly vertical faces. Among the attractions are the Sanshiro islands (sharing their name with a famous novel by Japanese master Soseki) and the Skylight Cave, found within walking distance of each other amidst the resort spas in this sleepy village near Nishiizu.


Nana and I decided to take advantage of a work holiday to visit and celebrate an anniversary of sorts, and at the same time to burn up some credit from a hotel booking site I’ll never use again. (The hotel was great; the booking site service less so.) My recent acquisition of a Japanese driving license has opened up new vacation options for us: we decide to rent a car and spend a couple of days puttering around Izu and see a variety of sights that would be too difficult to manage by public transportation.

En route to the hotel we chanced up Koibito Misaki, the Lovers Cape. Tradition has it that those who ring the bell three times will summon love. The cape also boasts a view of Mt. Fuji across the Suruga Bay, but skies were not favorable during our visit.

The choice of hotel turned out to be inspired: our room had a direct view of the Sanshiro islands, which are [L-R] Zojima (Elephant Island), Nakanoshima (Center Island) and Takashima (Tall Island). The hotel staff proudly boasted of the view and quickly informed us of the tombolo land bridge to the islands that emerges at low tide. The hotel keeps a schedule of low tide times and height of the exposed tombolo on a flyer in the elevator.

Nana and I quickly resolved to take the boat tour of the coastline and to cross the tombolo when it emerged from the waves. Unfortunately, we’d have to wait for the following afternoon for the tombolo. And when we checked on the boat, it was the same story: at the moment the tide was too high, but it would be a different story if we came back on the morrow. 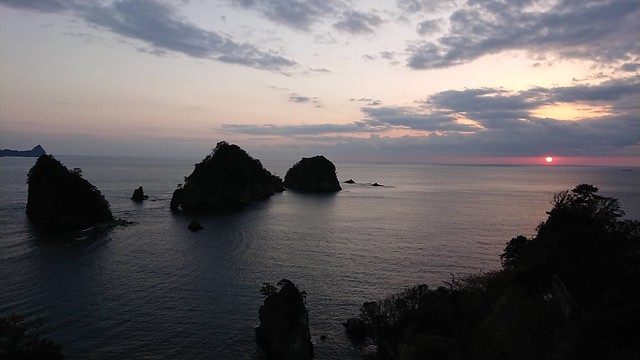 Undaunted, we returned to the hotel for a rest, a private bath (also featuring a view of the Sanshiro islands, but inferior to the view from our room) and a delicious kaiseki dinner in a quiet booth.

After a good night’s sleep and a traditional breakfast of broiled fish, rice and miso soup, we set out again for the boat landing. Yes, the boats were running and the skies were clearing at the same time. We quickly paid our fare and secured a couple of seats on the small boat that was already filling up with a busload of tourists.

The boat eased away from the mooring and took us at a sedate pace around the rocky cliffs and islands while a recording told us of the geological formations we were viewing. We got a view of the Sanshiro islands from the opposite side, with our hotel in the background. And then for the finale the boat took us inside one of the many caves in the side of the cliff rising next to the hotels, where we passed under the opening which gives this feature its name: Tensodo, or Skylight Cave. 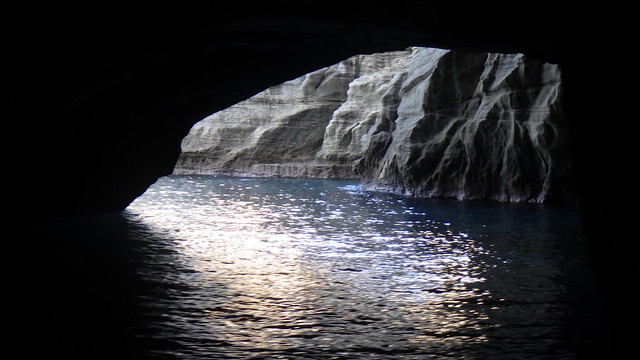 Following the boat ride, we spent the rest of the morning on sights in the central ridge of the Izu peninsula. But we kept our eye on the time and returned in the early afternoon to cross the tombolo to the Sanshiro islands. Or so we thought — we hadn’t counted on the tombolo being composed entirely of grapefruit-sized stones, loosely tossed together by the waves, and many covered with slippery moss and seaweed. It was very treacherous footing, and we gave up after venturing only partway across the bridge.

Others had come better prepared for the outing, in sneakers, hiking shoes and even waders. We saw several people turning over stones and gathering things with buckets, and stopped to ask one woman what she was collecting. “Kai,” she replied, giving a generic term for shellfish. She said that she uses them in miso soup.

I’m sure we’ll be back to Dougashima in the future. Perhaps next time we’ll follow the coast around the peninsula rather than driving over (and around and around) the mountains that form its backbone.