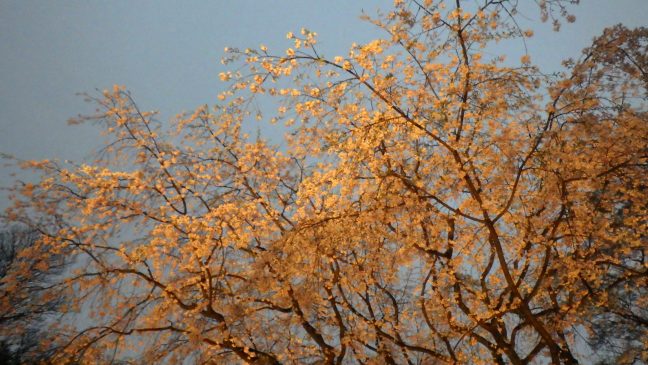 The illuminated cherry blossoms draw huge crowds to Rikugien every year with their photographically challenging beauty. This year, Nana had an idea to beat the crowds at this 16th Century garden dedicated to the six forms of Chinese poetry: arrive before dusk, enjoy the park and wait for dark.

It was a good idea except for the cold. The temperature never got very high yesterday, and it had fallen to about 8C when we arrived at the park at 4 p.m. Together with the lack of blue skies, it made for a pretty dreary afternoon.

The big draw for the illumination is the park’s famous shidarezakura, or weeping cherry tree (prunus pendula). This giant, planted shortly after the end of the Pacific War, is more than 70 years old and stands at 15m tall. Its branches span more than 20m across the garden.

This year, in the cold and waning light, the tree looked a bit sorry. The blossoms had yet to fully fill out, but the green leaves were already emerging. We took a few snaps and discussed the sorry state of the tree before hurrying on to see the rest of the park.

Rikugien is famous for far more than its cherry trees, including 88 stations based on scenes from Japanese poetry, several scenic bridges and tea houses, and two hills representing the male and female deities which gave birth to Japan.

There are several other cherry trees in the park, including another that’s taller than 15m at the opposite end of the park from the shidarezakura, near the site of Tsutsuji-chaya (tea house). By the time we’d reached this point, Nana and I were well and truly chilled and decided to have something hot to drink while we waited another hour for dusk to fall and the illumination to begin. We escaped the lure of the famous tea house and opted for warm sake and then electric kombucha and ryokucha at a simple pavilion.

As we sipped our hot drinks and nibbled on simple snacks, the approaching twilight brought more and more clients to the pavilion. We noted visitors of varying nationalities and tongues, all of whom were welcomed by the friendly staff even when they had to order via miming. Nana had just observed that no one was ordering draft beer on account of the cold weather when one younger Japanese man ordered and received a large chilled mug of frothy. Meanwhile, looking out the side of the pavilion to the benches under the open skies, I saw a young girl eating a matcha ice cream. Brrr!

At the stroke of six we decided we’d waited long enough. The lights were on and the crowds were growing thicker. Warmed by our drinks, we hurried back to the shidarezakura and found it transformed by the illumination. After getting a few snaps here we returned to the other giant on the far side of the park and found it bathed in light alternating from white to pink and then violet.

Rikugien is well worth the visit for the illumination in the spring or the maple colors in the fall, but be prepared for large crowds and a long wait to get in during these popular seasons. 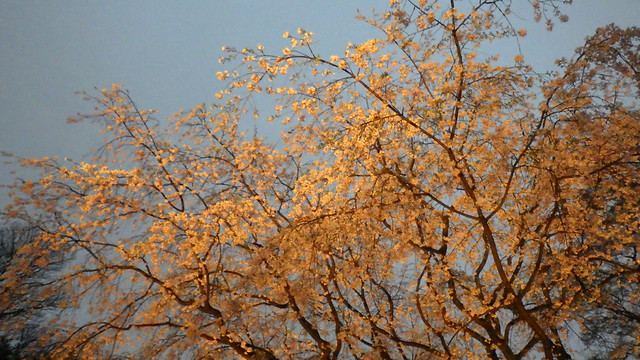