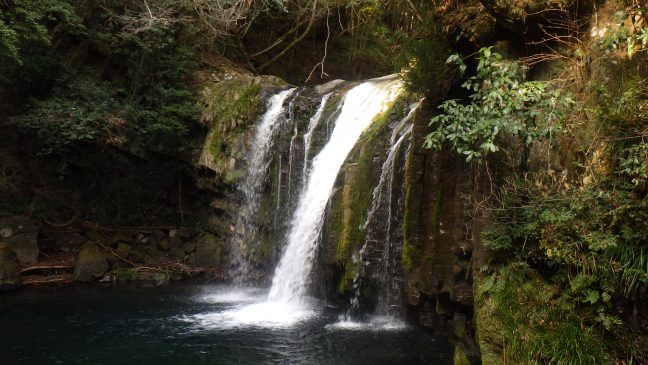 A series of seven falls through the volcanic rock of the mountains above Kawazu, featured in the works of Nobel prize winner Kawabata Yasunari
Location:
Kawazu, Shizuoka
Website:
www.nanadaru.com
Access:
By car, head north on Rt. 414 from Kawazu until just before the Nanadaru Loop Bridge. Hourly buses from Kawazu. Get off at the Mizutare stop and walk down the trail. Take the return bus from the Nanadaru Visitors Center.
Last Visited:
February 2019

A series of seven waterfalls along the Kawazu river cascades down a mountainside just a short drive north from Kawazu in Izu. Although it requires hiking more than 1km and some vigorous climbing to see them all, the natural beauty of the site is well worth the effort. Nana and I arrived in the mid-morning of a sunny and warm winter day, and started the series from the middle (as that’s where the route from the parking lot placed us).

In the riverbed en route to the falls lie two large stones surmounted by a circle of rope and other semi-religious accouterments. Visitors are invited to purchase three small pebbles from baskets at the edge of the walk for a nominal ¥100. After making a wish while holding the pebbles in their folded hands, the visitors throw the pebbles at the wishing stones. If a pebble lands atop one of the stones and remains, the wish is granted. However, the supplicant is admonished to return within the year to give thanks for the successful wish!

Just upstream of the wishing rocks, Shokeidaru fills a large pool next to a pair of statues illustrating a scene from Izu no Odoriko, a 1926 short story by Nobel prize-winner Kawabata Yasunari set in Izu. It’s one of the more impressive falls in the series (as well as being one of the easiest to access) with a 10m drop.

Next upstream from Shokeidaru is Hebidaru, the Snake Falls, so named for the scale-like appearance of the surrounding rock.

Continuing upstream after a swaying suspension bridge or two is Ebidaru, which is said to resemble a shrimp’s tail. The best view is via another swaying suspension bridge reached after scrambling over a rather narrow stone path branching off from the main trail. Your humble narrator has no inkling to what extent the rhyming of “hebi” and “ebi” played in the imagination of those who named the falls (but if they’re anything like a number of Japanese he’s met, it can’t have been far from their minds).

From the bridge the visitor has the choice of advancing over the next rocky ridge or retreating back to the main path. Either route will bring them to the next sight, the 22m Kamadaru.

Kamadaru, the Iron Kettle, marks the upstream end of the series with its 22m drop. The impressive falls was once feared as the entrance to Hell. Now, visitors are invited to shout from the depth of their soul towards the falls.

Returning whence we began, downstream of the wishing rocks is the unprepossessing Kanidaru with a 2m drop. While the name is suggestive of a crab, it’s written phonetically so no certainty can be given to this interpretation (and the official website’s description doesn’t cast any light on the question).

It would be in keeping, though, with the seafood metaphor suggested by Ebidaru …

Passing downstream brings us back to the main road, with two more falls lying on the other side, and to an unexpected meeting.

The river continues to descend at this point and so must we, clambering down rough-hewn steps to find the next falls: Deaidaru, at the meeting of two streams, the first of which has fed all the falls we’ve seen to this point.

Deaidaru actually encompasses several distinct drops, and it’s difficult to say which particular one merits the name. It seems that the separate streams both sport a few moderate drops before they join in a pool.

We have to climb back up to the road and walk past the parking lot and cafés to reach the final, and largest, waterfall in the series: Odaru. The path to Odaru is flanked by a private spa, and the route may be closed on days the spa is in use. At the foot of the falls is a party pavilion and three separate but very close and public pools, leaving Nana and me to speculate whether the customers of this particular spa wore bathing suits or else were a particularly fun-loving bunch.