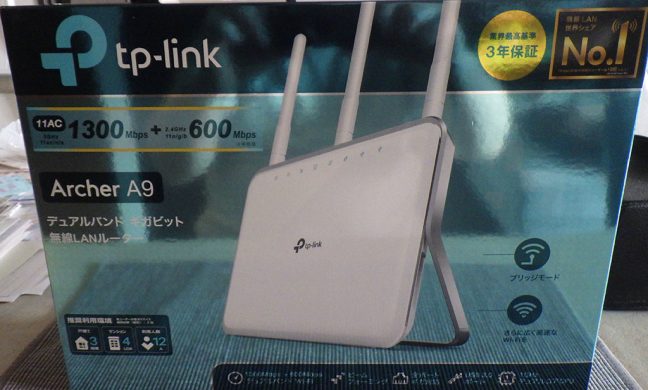 Now that Nana has a new laptop (and mine is on the way), I decided it’s time to upgrade the wireless access point. We’ve been using the same little 802.11n-type access point for about four years now. I bought it at Bic Camera for a ridiculous price, not much more than $20.

So yesterday I spent five minutes picking out a new 802.11ac WAP on Amazon, for rather a bit more than $20, and it was delivered this afternoon. (The delivery person took 20 minutes to get to our apartment after ringing up from the delivery entrance, but that’s not the WAP’s fault.)

It didn’t take much longer to set up than it did to first pick it out (although it was long enough that Nana noticed the internet was down, after she’d ignored me telling her it was going to be down for a few minutes). Once I connected I had to go to the router’s home page and set an admin password before it would connect with the outside world. That’s a good idea, actually.

It has a bunch of advanced features that we may never use, such as a dynamic DNS service in case I want to run my own server, and a guest network. Meanwhile, it’s humming along quietly in the corner. Nana hasn’t yet mentioned if it’s any faster with her new laptop.