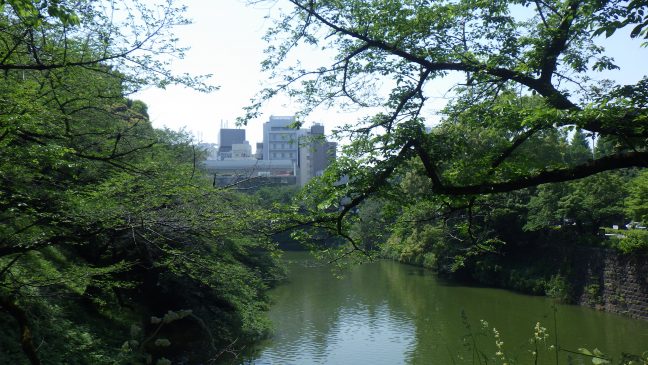 I’d been biking in Japan for years, mostly up and down the Tamagawa, when I stumbled across this brilliant short loop route that takes in a lot of famous Tokyo sites. On the downside, the ride is almost entirely in traffic. Riding on a Sunday minimized this in some places, but others (e.g., Ginza) will be busy no matter when you go.

I pick up the route where it brushes the corner of Shinjuku Gyoen and continues down through Sendagaya to Gaien. Along the way it passes the construction for the new Olympic stadium.

From Gaien we continue down through Midtown and Roppongi before coming to a fairly open view of Tokyo Tower in Azabu.

From Tokyo Tower it’s a bit of a climb and then a long lateral across and through Azabu and Toronomon to Kasumigaseki, with all the government ministries.

The Ministry of Justice is at a corner adjacent to the Sakuradamon gate of the Imperial Palace. Rounding the corner, we come to Hibiya Park, which is an opportunity to fill up the water bottle before striking out in heavy traffic towards Ginza.


Braving the traffic, we continue southwest through Ginza and then past the Kabukiza. We had to cross to the other side to get a good photo as the theatre comes right up to the pavement.

Next in quick succession come the world-famous Tsukiji Fish Market (although there’s not much to see as it’s closed on Sundays) and the Sumida River.


It’s still a long, straight stretch to Odaiba, which we reach after a gentle but prolonged climb up Harumi Ohashi (bridge). The Rainbow bridge is visible off to the right from Harumi Ohashi, but don’t bother to stop and take photos here. By continuing right on Ariaki Avenue, on the first and only cycle path we’ll encounter along the route, we’ll come to a much better view.

We were passed by the Mario Cart tourists as we took this photo, but we can’t guarantee you’ll have the same luck.

As Odaiba is entirely reclaimed land in Tokyo Bay, it’s very flat and there’s nothing to protect us from the wind except the few buildings here — rather sparsely constructed compared to the situation we just left behind as we crossed Sumida River. At least we can’t claim it was both uphill and against the wind.

Another turn by the ferry terminal brings us to Tokyo Big Sight and an opportunity to dismount and fuel up on onigiri at a nice shaded bench by the side of a park. There’s a 7-11 right here to provide both the onigiri and fresh, bottled water (and there’s a water fountain as well for those less picky).

With the lunch break over, we continue past Tokyo Big Sight and turn again towards one of the many channels and passageways of the Sumida River. To the left we’re treated to a serene view of the polluted Toyosu Fish Market, and — in a bit of luck — a water skier!

Back across to the mainland (via a much lower bridge) we have another long, straight dash (OK, a couple of jogs left to be honest) in traffic before reaching Ryogoku, where we pass the Edo Tokyo Museum before coming to Ryogoku Kokugikan, Tokyo’s sumo arena. And we’re in luck! It’s the summer basho and all the flags are flying. (And just our luck — the sumo walked by in bright pink, blue and yellow yukata the moment we put the camera away.)

Now follows another long stretch in a lot of traffic to take us back west, aiming for the opposite side of the Imperial Palace this time. Along the way we pass the sporting goods stores in Kanda and then the famous used book district, and that’s the signal we’re just about to reach the last big attractions of the day. It’s a bit of a workout to go from Kundanshita (lower Kudan) up to Kudanue (upper Kudan), but we like to make it to the top before turning back and coasting down the sidewalk to Chidori-ga-fuchi and Budokan.


Apparently it’s permissible to cycle through the famous Tayasumon gate into Budokan, but we prefer to dismount and enjoy the views of the cherry trees lining the path, as well as the reflections of the sunlight in the ripples of Chidori-ga-fuchi.

There’s one more attraction, if you will, just a bit further on and on the opposite side of the street: the justly infamous Yasukuni Shrine. We prefer to pass it by, pausing just long enough to shoot a photo through the gate for the purpose of this exposition.

Finally, we’re nearing our starting point. After a couple of brief hills it’s another long, straight shot back towards Shinjuku Gyoen. That completes the loop, but we continue on just a bit farther past Shinjuku Station to see the Tokyo Metropolitan Government building towering over Central Park.

Our petit Tour de Tokyo is a fun ride overall despite being in traffic (heavy traffic at times). Within a few hours we see lots of famous Tokyo attractions, and at the same time get a new understanding of where things are in relation to one another which is hard to come by for the daily subway commuter. The roads are paved and mostly flat, and the plus side of dodging in traffic is fewer encounters with pedestrians compared to the Tamagawa cycling path. The course is also brief enough that there’s no worry about running out of daylight, regardless of the season. 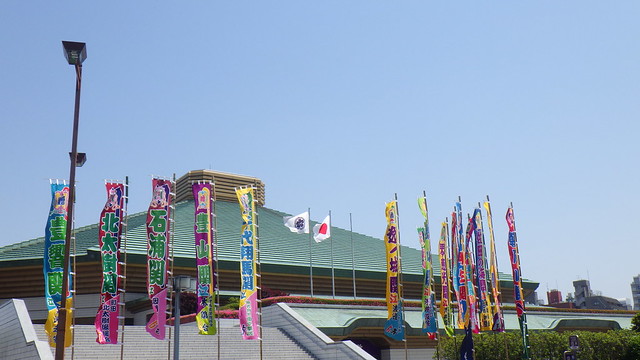 I found this route via Tour de Nippon.