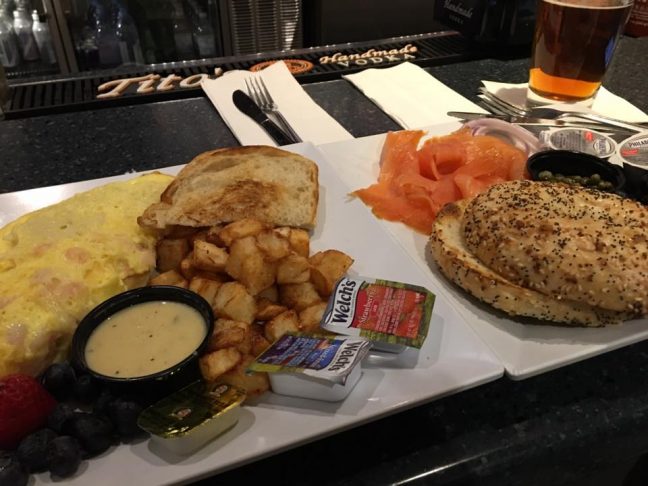 On our way home from visiting my family, we had a two-hour layover in Seattle. We decided to stop in a café since Nana hadn’t had any breakfast. We were working on the Eastern timezone and so wanted some lunch, but in Seattle it was still breakfast time. So we ordered a local IPA and had a seafood omelet and a lox and a schmear.

That turned out to be too much food for us, as Nana only finished half the omelette and didn’t have any of either the sourdough bread or the bagel. But I was eager to sample the lox in Seattle, so I did my best to plough through it all. (As a result, I skipped the meal service on the flight home, but that was no great loss.)

A little early in the morning for that sort of thing?

Anyway, as we were enjoying the food and the IPA, I noticed that one of the waitresses was upselling on the beer. Whenever a patron ordered a beer, she would suggest a shot of bourbon for an additional $5. Where I come from that’s a boilermaker, and I was amused to hear the waitress pushing them at 9 a.m. local time. (I did not verify if everyone having alcohol in the café was, like us, working on a different time zone.)

There are levels of geekdom

The other thing I noticed while we were enjoying the food and drink was that the two waitresses kept talking about a machine that wasn’t working. I didn’t hear what machine they were discussing, but they were agreed that it wasn’t showing any sign of power. “I pulled out the plug and then plugged it in again, and I reset the breaker,” one of them said.

I briefly thought about offering to have a look, but to be honest my geek is more on the software side of things. Give me a couple of hundred thousand pages of content to be repurposed and I’m all over it. Sorting out a shorting bit of commercial kitchen hardware? I didn’t even have a continuity tester on me.

I think the ladies really needed someone like this guy:

(There are hundreds of these videos, and I can sit and watch them for hours.)