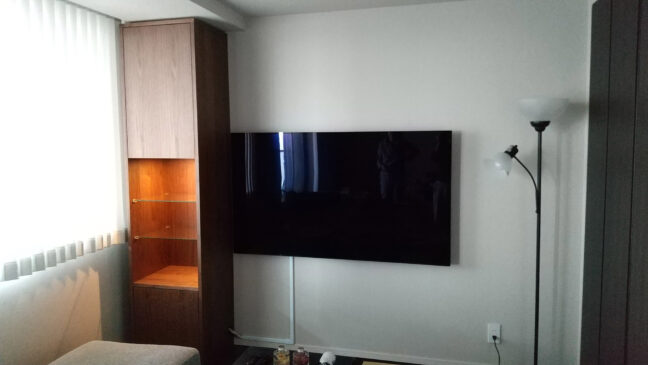 It’s taken me ages to persuade Nana to get a new TV, but the moment she’d done that she wanted a custom cabinet made to go with it. We went to the same designer who did the bookcase / folding bed unit and desk for my den. In addition to the new TV cabinet, we wanted to ask for ideas to earthquake-proof the bookcase, which I’m using mostly for CDs.

It didn’t take long for the designer to come up with a cabinet we liked, and he gave us a couple of ideas on the bookcase. We agreed to have a low wooden lip installed on each shelf. Then it was just a matter of agreeing on the price and having a worker visit to verify the measurements, and after that the wait for it all to be ready.

When we visited the showroom they were featuring a grey color scheme that Nana liked, but once we were back home and she saw how well the bookcase matches the flooring and wooden doors in our flat, she agreed it would be better to have the TV cabinet match as well.

The designers had measured carefully to fit the cabinet between the blinds and the TV, with cutouts for the wall socket behind and the utility outlet up near the ceiling (intended for an A/C we will never have installed here). We were supposed to have the TV mounted midway between the right edge of the cabinet and the opposite wall, but I was at the office the day it was installed and it somehow ended up smack in the middle of both walls. But no mind — it fits.

The DVR and region-free DVD player are in the bottom of the cabinet. To allow the remote signal to reach these devices, the door is made of glass with a very thin veneer of wood — just 2-3mm. Nana has already tested it and indeed the devices respond to their remotes with the door shut.

Enough of your lip!

On to the bookcase! For some reason I’d imagined the cabinetmaker would use some kind of router to make grooves in the shelves for the lips, but in fact he just screwed them onto each shelf as it was (after carefully measuring, of course). I’m happy with the result, and Nana is breathing easier.

The final bit of work today (it was the first undertaken, actually, and the one that took the most time) was to level up the two halves of the bottom shelf. In the two years we’ve had the bookcase, one of the shelves has warped and sagged noticeably compared to the other. Now, after the cabinetmaker’s efforts I’m sitting at the desk and can hardly make out the seam. (Seen from above, as in this photo, there’s a darkened edge on one shelf which makes it look uneven, but when I run my finger across it I can hardly tell where the seam is.)

One thought on “New TV cabinet”

This site uses Akismet to reduce spam. Learn how your comment data is processed.