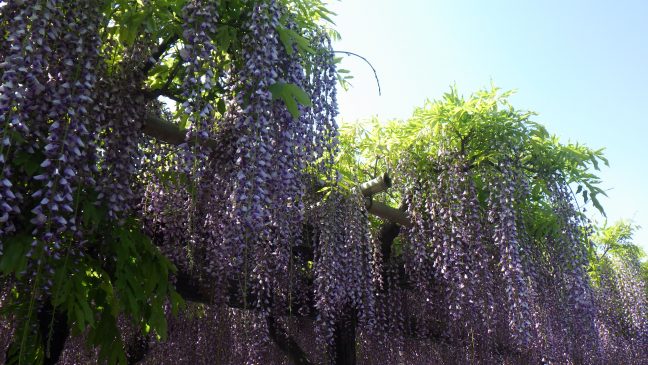 17th Century shrine famous for success in examinations and for wisteria
Location:
Koto Ward, Tokyo
Website:
kameidotenjin.or.jp
Access:
A 14-minute walk from Kameido Station on the Sobu Line, or 16 minutes from Kinshicho Station on the Sobu, Chou and Hanzomon lines.
Last Visited:
April 2018

Kameido Tenjin was built in 1646 to enshrine Sugawara no Michizane, a 9th Century scholar and politician who served Emperor Uda. Despite his service ending in disgrace, with accusations of plotting against the throne, a number of shrines to his memory sprang up from the 10th Century to appease his spirit when several years of catastrophes followed his death.

Kameido is a favorite spot of students studying for examinations. The students will visit the shrine and write their prayers on a wooden ema, which they tie to a stand just outside the shrine’s main entrance. Students who are successful may return with a gift: a live turtle to leave in the shrine’s central pond. While it’s uncertain when this tradition started, it’s undoubtedly a reflection of the shrine’s name: 亀 (kame) means “turtle” or “tortoise.” Even the temizuya reflects this theme. (The name comes from the village where the shrine sits.)

The shrine has several festivals throughout the year: plum in February, wisteria in April and May, and the Chrysanthemum Festival from late October through November. In addition, once every four years, the shrine hosts the Reitaisai. In this festival, a bull pulls a horen (portable shrine) through the neighborhood. But of all these, Kameido is probably most famous for the wisteria festival.

Kameido Tenjin is home to about 200 wisteria trees. These have all been planted since the end of the Pacific War, as the temple was destroyed. When the trees blossom in late April and early May, crowds throng to this modest shrine. News broadcasts feature images of blossoms, which adds to the popularity.

As the wisteria are spread throughout the shrine grounds, they may not all bloom at the same time owing to differing amounts of sunlight received. But don’t wait too long in an effort to avoid the crowds: the blossoms may wither quickly in May if the weather turns hot.

Right amidst the wisteria in the center of the shrine grounds, a greenish pond is home to numerous turtles, enormous koi, and at least one heron. As mentioned, students will leave live turtles as a way of saying thanks for a successful exam, with the unfortunate result that cheap and readily available Mississippi turtles now outnumber the domestic variety.

The shrine’s final attraction is its large red taiko bridges, unusual (if not unique) in Tokyo. The Men’s Bridge, representing the past, greets visitors just inside the entrance torii, while the Women’s Bridge, representing the future, brings them to the steps of the shine itself. (The current bridges are concrete reproductions as the originals were destroyed during the war, along with the rest of the shrine. See a 1911 photo of one of the original bridges here.) 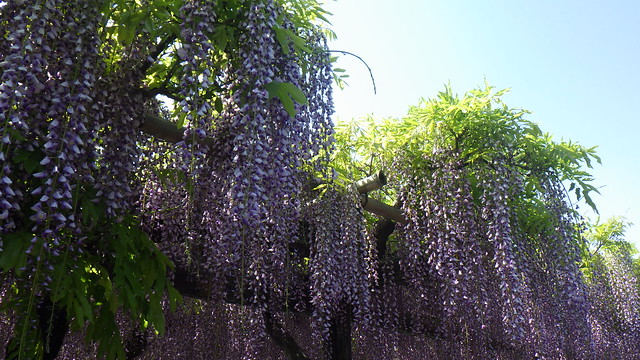 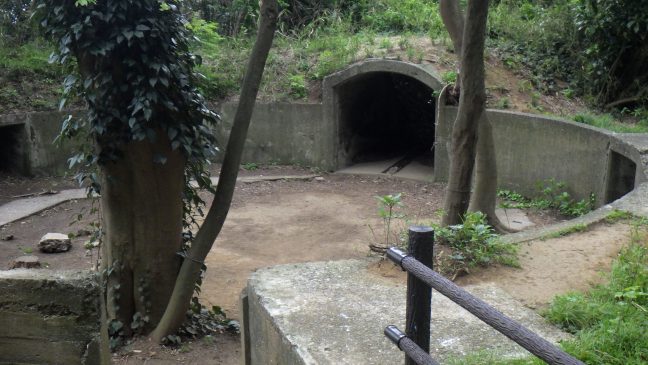 Sarushima (Monkey Island), billed alternately as an uninhabited island, a “Natural Wonder Island” and “Adventure Island,” sits in Tokyo Bay just off the shore from Yokosuka in Kanagawa. It is home to fortifications from the Tokugawa and Meiji eras and is designated a National Historic Site. In addition to the fortifications, the island is also a popular destination for fishing and — during July and August — for beachgoers. It is uninhabited in that no one lives there, but there are restrooms, a gift shop featuring craft beer, and a rental shop for such things as beach umbrellas and barbecue grills.

Access to Sarushima is via a 10-minute ferry ride from Mikasa Park, itself a 15-minute walk from Yokosukachuo Station on the Keikyu Main Line. (Alternatively, you can book a tour bus, as we did, and avoid the walk.) You’ll know you’ve arrived when you see the Mikasa, the 15,380-ton flagship of Admiral Togo during the Russo-Japanese War.

The ferry runs once every hour from March through early November. You can find the schedule and fares here. It pays to arrive early as seats are limited on the ferry, and you could find yourself standing on the upper deck, exposed to the elements. As it happened, we hadn’t been waiting long before it started raining. As this also happened on our return trip, we dubbed the ship “Bringer of Rain.”

Following a very brief and smooth trip, for which standing should pose no challenge to anyone but the most lubberly of land-lubbers, we disembarked on the island at the site of the popular beach (empty on a cool, somewhat rainy April day). Stairs lead up to a board deck, and guides in English are available here from a small hut to one side of the stairs. From there it’s a gradual climb up a path that curves between tree-studded ridges to the first of the historic fortifications. The path is paved, with boardwalks in places, and for the most part shouldn’t present a challenge to either youngsters or seniors.

Divine guidance from a white monkey

According to tradition, the priest Nichiren Shonin was traveling from Kamakura to Boso in May 1253 when his ship was beset by a storm. The crew had no way of knowing what direction the ship was heading. Suddenly, a white monkey appeared out of the storm to stand at the bow of the ship and guide it to safety on the island. Thus the name “Monkey Island” was bestowed.

The fortifications consist of a series of tunnels, barracks, armament stores and gun emplacements. Nothing remains of the latter now except for circles in the concrete foundation with rusty bolts sticking up. Meanwhile, the stone walls — some of which date from the Tokugawa Era — have been embellished in more recent times by graffitists. (Presumably this occurred before the site was granted national historic status.)

One of the attractions of the island is Nichiren cave, an ancient dwelling site on the island’s northernmost point where archeologists have unearthed Jomon era artifacts. The cave is more of archeological than scenic interest, though, and is hardly worth the 30m climb down (and then back up) a winding steel staircase scarcely wide enough for two people traveling in opposite directions. On the other hand, a climb up to the lookout post at the highest point of the island rewards the visitor with vistas in several directions.

With our bus tour group, we were given 45 minutes to explore the island before queuing up for the return ferry, and it wasn’t quite enough. We covered most, but not all, of the island and then barely had time to pick up a few bottles of Sarushima beer from the gift shop before it was time to line up on the pier. Then, as “Bringer of Rain” lived up to its moniker, there was a rush for seats and quite a crush on the ferry back to the mainland. Soon we found ourselves back at the Yokosuka Port Market, where we discovered we could have purchased the Sarushima beer — as well as a few other local varieties. 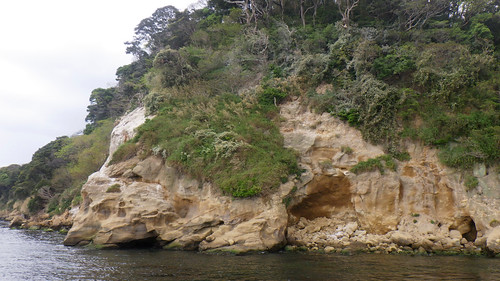